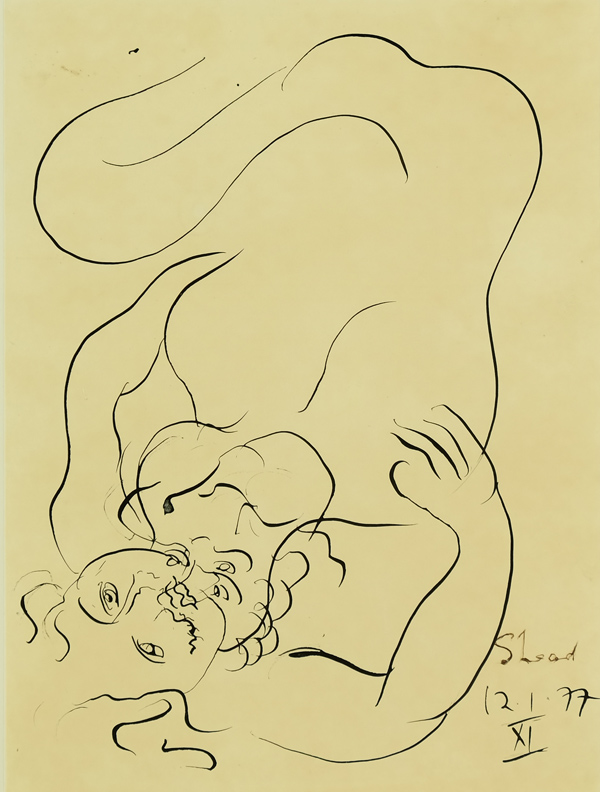 Shead acknowlwdges the influence of past artists upon his work and Picasso’s influence can clearly bee seen in this pen and ink drawing ‘Lovers XI’. Shead has won both the Archibald Prize in 1993 with a portrait of Tom Tompson and the Dobell Prize in 2009 with Colloquy with John Keats.

Shead is represented in both state and national galleries and private collections both nationally and internationally.

Garry Shead is an Australian artist and filmmaker who won the Archibald Prize in 1992/93 with a portrait of Tom Thompson, and won the Dobell Prize in 2004 with Colloquy with John Keats.

He won the Young Contemporaries Prize in 1967 and travelled to Japan, Papua New Guinea, France, Vienna and Budapest. He returned to Australia in the 1980s. His paintings are in many galleries in Australia and overseas.

Born in Sydney, New South Wales, he studied at the National Art School in the 1960s. He was a founding member of the Ubu Films collective in the late 1960s, with whom he made numerous experimental film works, and he also worked for the ABC as an editor, cartoonist, filmmaker and scenic painter before his first major solo exhibition with Watters Gallery in Sydney.

During a residency at the Karolyi Foundation, in Vence in southern France he met Hungarian sculptor Judith Englert, and spent a year in Budapest with her before returning to Australia. They eventually settled in the seaside suburb of Bundeena, south of Sydney, in 1987. During the late 1980s his style (figurative, allegoric, lyric, moody) crystallized with the Bundeena paintings, the Queen series and the D. H. Lawrence series. This last is based on Lawrence’s novel Kangaroo, which was inspired by Lawrence’s stay at Thirroul, near Wollongong. Shead became interested in Lawrence after he came across letters by the author on an expedition to the Sepik Highlands in Papua New Guinea in 1968. The 21st century saw him branch out into a complex set of paintings celebrating the Ern Malley series of hoax poems. Shead is represented in the National Gallery of Australia and all state galleries, many regional galleries and numerous private and corporate collections, both nationally and internationally.

If you have any questions you want to be answered, please contact us via the form below. Alternatively, you can give us a call, please see our contact page for more details.

Badger & Fox Gallery is proud to be part of the Art Money program which allows you to purchase our art with your interest-free loans from Art Money.

Please contact us to make a purchase with ArtMoney, or to apply please head over to the ArtMoney website.

What is Art Money?

Art Money makes owning art immediate and affordable. Payments are spread over 10 equal monthly payments. After paying a 10% deposit, you can take your artwork home and pay the remaining balance over 9 months, interest-free.

All artworks are sent via Pack & Send both within Australia and overseas. For large items, we may use a specialised art carrier. Small items may also be sent via Australia Post.

Shipping Costs:
Unless the shipping cost is itemised when you purchase, Badger and Fox Gallery Pty Ltd will contact you regarding the shipping costs, as these can vary as artworks are different sizes and weights. Please contact us if you would like a shipping cost prior to purchasing if it is not itemised.

Shipping costs include all packing and packaging materials. Insurance is included and a track and trace facility is available on all dispatched items.

Learn more about our shipping and delivery.

We are confident you will love your new artwork, but should you not, we have a money back guarantee. It means, if the works are not described as shown in the text and photos, or if you are not satisfied then we will happily accept the return of the works of up to (7) days after you have received it. Please contact us to initiate a return.

To be eligible for a return, the artwork must be in the same condition that you received it. If your return is accepted, we’ll send you a return shipping label, as well as instructions on how and where to send your package. Items sent back to us without first requesting a return will not be accepted

We will notify you once we’ve received and inspected your return, and let you know if the refund was approved or not. If approved, you’ll be automatically refunded on your original payment method. Please remember it can take some time for your bank or credit card company to process and post the refund too.